In the first week of March a group of four members of the DARC OV B19 activated the Island of Spiekeroog with the IOTA ref. EU-047.
The four ops at the mics and keys were: DF2MX Max, DK2RO Robert (me), DL8AW Anton and DL9NAC Norbert.
We set our little station, consisting of an IC-7200, a Dipole and a symmetrical tuner, up the day we arrived. At first we put up the dipole between to trees in the garden and then we set up the rig in the flat we could use for our activities. After turning on the radio we had a short sked with stations in from our home and after that we enjoyed nice pileup on 40m.
The conditions were with us, so we could log many stations from all over the world. Especially in cw I could still the demand for EU-047 on other continents. In the nights I had several good runs with stations from America on 30 and 40m. And in the morning hours on 10m, I could log many OMs from Japan.
Because our main reason for being on the Island was to work there, we could operate our station only in the spare time and on many occasions we also just enjoyed the mild and sunny weather with long walks around the island.
On the day before our departure from Spiekeroog I took the opportunity to activate the WWFF reference DLFF-010 with my lightweight portable setup. (own page)

After almost 8 day of operation we had a sum of about 1200 QSOs in our logs and where quite pleased with this result.
Thanks to all YLs/OMs, who worked us! 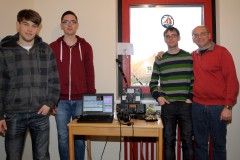 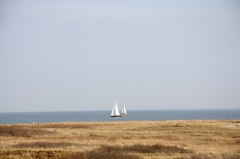 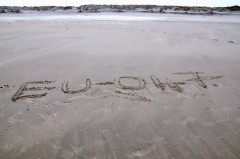